skip to main | skip to sidebar

For Muslim travellers, this little information that I am going to tell you may help to find these services fast enough when you visit this city in the future. It is about a mosque and halal restaurants. Since there are few Muslims in Vietnam, certainly these services are important to the Muslim visitors.

There are a few mosques in Ho Chi Minh City. This includes the one in Cholon, a mosque along Nguyen Van Troi Street and of course the Central Mosque.

The Central Mosque is located at Dong Du Street in Ho Chi Minh City. Dong Du Street is located between Dong Khoi and Ba Trung Streets. It is about one kilometre (to the north) from Ben Thanh Market. You need to follow Le Loi Avenue and turn right to Dong Khoi Street and look for Sheraton Hotel. The mosque is quite old and had staircases. 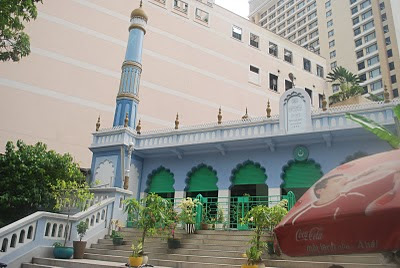 Central Mosque at Dong Du Street. On the left is Sheraton Hotel. 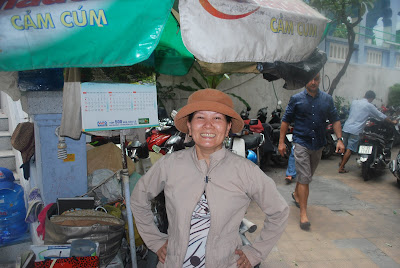 The lady who is in-charge of vehicle parking in the mosque compound. 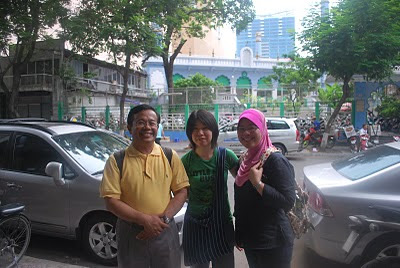 Posing for a picture with Jet Yau and Hana. Both girls are tourists from Malaysia.

This mosque is more than 40 years old. Behind it, there is a religious school and a canteen. The mosque design is like other mosques in India. There is a large "kolah" (rectangular pond) for people to use the water for ablution. 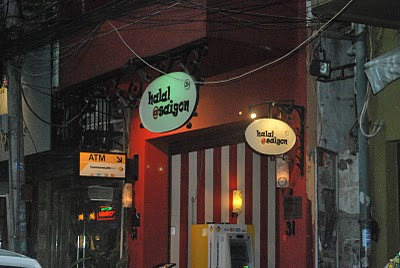 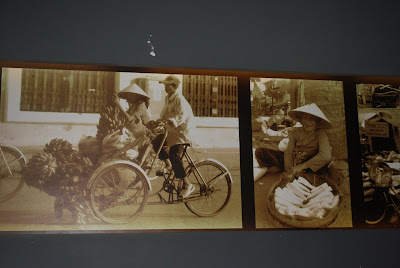 The pictures on the restaurant's wall. 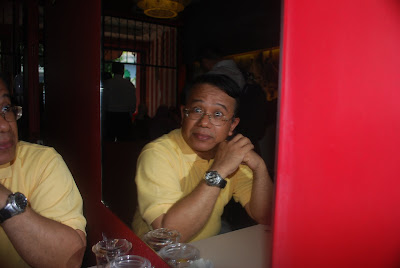 The restaurant is narrow. It is only 12 feet wide. Therefore, to look wider, the operator hung many mirrors at the wall. 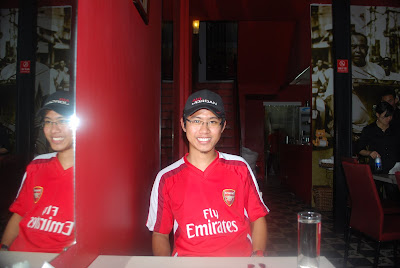 One of the visitors to the restaurant. 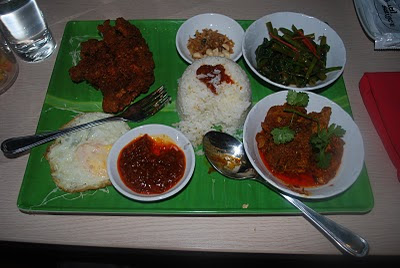 Nasi Lemak with "Rendang Ayam"(chicken with coconut milk), sambal, fried chicken, fried egg, anchovies and nuts and the vegetables. It cost VD100,000. It is delicious.

Other restaurant which offers Malaysian food (Malay food) is Four Seasons. It is located at Thi Sach Street, a street away from Dong Du Street. I did not have the opportunity to taste the food there as when I arrived   at the door, I found they were many patrons occupying all seats. 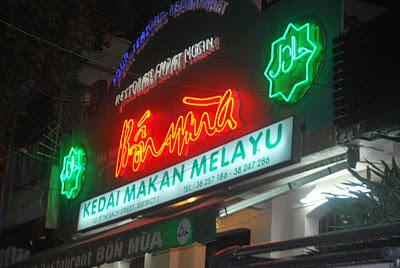 For those travellers to Ho Chi Minh City, these restaurants serve  good food and its location is accessible and strategic. The caution is, if you come with a large group, it is advisable to make reservation. If not you may not be able to eat there. You may have to find alternative food like bread or cake. Two slices of chiffon cake cost VD5000, a loaf of french bread cost VD5000 at the market. The cup of tea or coffee cost VD10,000. If you want to taste Vietnam's Pho, there are many Pho shops with the name of Pho 24. Look for vegetarian pho. Pho is a Vietnamese noodle soup. It is called bee-hoon soup in Malaysia or Bakso in Indonesia.

Update march 2012: There is a new mosque at the Khoi Nghia Street, towards the river, by the name of Masjid ArRahman. For the restaurant: VN Halal 14, Pham Hang Thai, 100 metres south to Ben Thanh market.Open:11.00am -9.00pm. This double storey restaurant can accommodate  many diners at a time .Tel 0838 220.252 email: rid.wane@yahoo.com.vn; For those who like ready made halal food, try at Parkson food court level 5 or just try fish and chips at KFC around the city.